A Green is Not a Green

When talking about that arbitrary difficulty rating of ski runs, that is.

On my first true winter vacation experience last week in Copper Mountain and Vail CO, I decided (among many things) that there needs to be subcategories of green ski runs.  I'm sure there should also be subcategories of the blues and blacks, but surprisingly I haven't experienced too many of those.  Only one.  And that was one too many.

In order to make my inaugural ski trip the most positive experience possible, I signed up for a private lesson on the first morning.  Ski instructor and I had a great morning cruising down the bunny slopes!  My kind of skiing - just cruising.  No fear for my life.

At the conclusion of the lesson, ski instructor highly encouraged me to stay on that slope for the several days and not to let TB and his friends push me into anything that I was not ready for.  We could even leave our skis at right there with him and return for them after lunch!  I should have known the day would take a dark turn when TB politely declined and said we would just take our skis with us.  As we rounded the corner away from ski instructor, TB confidently said, "We don't need to come back here".  Riiiight.

Later that afternoon I found myself falling off the ski lift at the top of the mountain, only to come face to face with.................... a BLUE.  Yep.  A blue that really should have been classified a double black due to the death defying drop that I was staring at.  After realizing I had no alternative, I started down the cliff.  Started and didn't get very far.  Ten feet down the blue that should have been a black, I lost both skis, a pole and every bit of confidence I had gained with ski instructor.  TB and I then proceeded to get an amazing upper body workout thanks to miles of cross country skiing on catwalks, as every trail going down was a black, blue or a green that looked suspiciously like the blues and blacks.  It was a one lift afternoon that included some yelling, tears, curse words and swearing that this was the worst sport in the world and I was done.  D. O. N. E.  Well, I couldn't actually be done until I made it off the mountain, but I would be done once I figured out how to get down.

After eventually making it off the mountain, I was then left with a delima.  This was day one of four full days of skiing and we had pre-purchased lift tickets.  Groan.  I'm not one to waste money, but I wasn't so sure I was into the whole skiing thing.  In the end, my stubborn side won over and I refused to waste 3 days of lift tickets.  I did eventually master those easy green slopes, appropriately tittled Kokomo (you know, the song about taking it slow). I even got to know the ski lift workers as they wondered why I would only ski one run on the entire resort.  The first winter vacation ended on a high note and I may even be willing to go on another ski vacation provided I get spa breaks and have an easy green friend along for the trip.  I'd at least consider it. 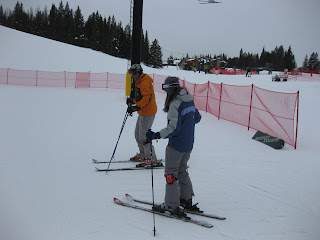 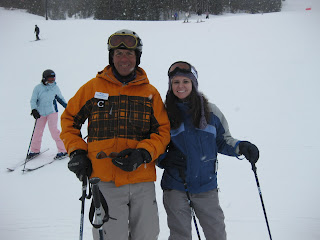 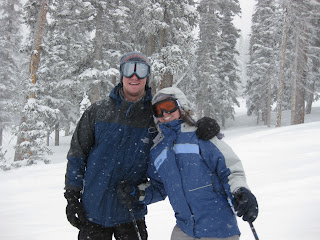 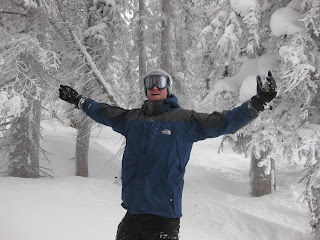 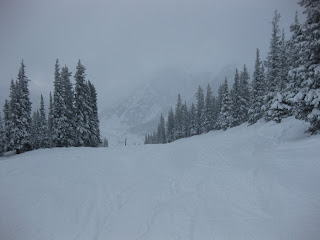 Special thanks to Amanda C. for the loaner ski clothes which kept me toasty!
Posted by Leslie at 7:17 PM