I love junk food.  Cookies, cupcakes, chocolate - but more than anything, I love ice cream.  I'm not sure when this love affair started.  Maybe in college.  My first roommate Heather, used to always eat a scoop of ice cream in the evenings out of a coffee cup.  Maybe we ran out of bowls, who knows.  I never asked her why she used a coffee cup or why I even remember that.....  Then while living in Tampa, TB and I literally lived around the corner from a Marble Slab.  It was heaven.  I'd drag him over there almost nightly.  I'd happily order up my concoction and TB would always order something - but seem unimpressed.  One of TB's major faults is that he is not a dessert person.  But I've gradually worn him down and I now catch him stocking up our grocery cart with ice cream - even without a subtle suggestion by me.

While TB and I were recently in an airport waiting on a connecting flight, he disappeared and came back with a surprise.  A large waffle cone with chocolate ice cream. Yummy!

Now, I will admit that it was a slighly selfish thought to think this whole thing was for me.  I'm willing to share.  And I quickly conceeded that point.  But only that point.   He still ruined the ice cream cone.

Everyone knows there's a proper way to eat an ice cream cone.  I mean we've all seen that messy kid that lets the ice cream get away from him and seems oblivious to it dripping all over his arm and clothes while he's eagerly chowing down.  Picture that in a grown man and you know what I experienced in that airport.

After his huge bite of our shared cone, I weighed my options.  I was willing to share, but that thought was based on a non-ruined ice cream cone.  Am I allowed not to share, if he ruined it?  Do I go buy my own?  Or do I still make an attempt to share?

As these thoughts are quickly running through my head, TB holds out his chocolate dripping hand to pass me the cone.  I hesitantly took the cone for my turn.  Seeing the gaping hole in the side of the cone, I had to take preventative measures and clean up his mess by licking up all the impending drips.   Which meant, I didn't get to eat any of the cone.  The best part. In the corner of my eye, I can see him working his way through a mountain of napkins attempting to quickly clean up the chocolate drippage before his next turn.   On his next turn and much to my horror, he takes another big bite of cone/ice cream and hands it back to me.  Again.  Preventative measures.  This back and forth went on for a few turns and then TB asks an interesting question.

"Oh.  I didn't know you don't like waffle cones.  Why aren't you eating any of the cone?"

I had to explain that because of his reckless eating style that I had to use my turns to make sure we didn't end up looking like 4 year olds with ice cream from head to toe and I just never had a chance to eat the cone.

After a thoughtful, "Hmmm." TB made an interesting observation.  He said, "I think the way we each eat the ice cream cone reflects our personalities."

TB dove in head first when he saw something he liked, without regard for the consequences.  He would fix those later, and maybe it didn't matter in the grand sceme of things if he ended up with ice cream all over the place.  At least he enjoyed the best part of the ice cream cone.

Is it a scientifically sound study?  Probably not.  But I think it does hold a bit of truth in our situation. 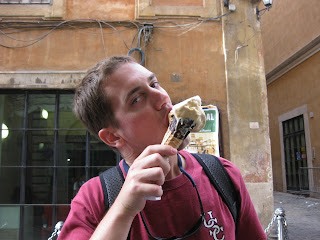 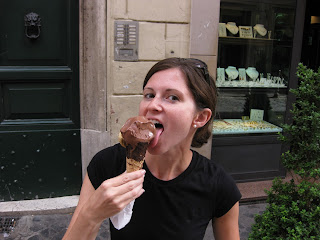 When 2011 began, I made a few resolutions, wrote them down and left them in my planner/notebook.  If you know me - I live and die by my planner, so I saw those resolutions almost every day.  You would think that would mean I was successful in keeping those resolutions. Well.  Let's do a little review to see how I did...


1.  Take tennis lessons:   FAIL
I have no excuse.  There's a big tennis complex about a mile down the road from our house.  They offer lessons on a monthly cycle.  I just never signed up.

This was probably the hardest resolution I made in 2011 and somehow managed to achieve it towards the beginning of the year.  If you missed it, you can find the deets here.  All in all, it was a grand time and I'm planning on signing up for another one soon and hope to beat my time.

I'm ashamed to admit that I put minimal effort into this one....... I checked out some classes online and then...... that was about it.  I have no excuse.

Ummmmm.  Same as above.

This one is definitely a fail, but I'm going to make a few excuses this time.  I found a class which met  every Saturday for a month.  Our travel schedule was absolutely crazy this past year - so it took most of the year to find a month were I was actually home four Saturdays in a row.  And then a week before my first class, it was cancelled.  It seems I was the only one signed up for the class....... I suppose there isn't much interest in knitting classes.  My spirits were a bit dampened after the cancellation - so I never looked for another place.  Excuses excuses.

Still a fail, but I did print out the county's application for recycling boxes.  Just never quite mailed it in with the check.  Seriously - you can't do this online?

All in all, I'm proud of my one success story here, but a little embarrassed I didn't put much effort into a few of them.  I'm still working through my resolutions for 2012, but a few of these might carry over.  We'll see.