They say it takes a village.

But who has a village these days?  In the literal sense, the "village" is long gone.  We no longer live in small towns where you're surrounded by the elders in your family and community.  Where those people are available to give advice, teach or lend a helping hand.  TB was told by some of his Indian co-workers that when a woman has a baby in India, she often goes to live with her mother for several months.  I suppose the Indian culture has held onto the village concept a bit more than we have here in the western world.  With all the responsibilities most of us have these days, the idea of going to live with our mothers for several months is not logistically possible, not to mention that I suspect a great many people wouldn't want to live with their mothers again.....  Even taking family aside, most of us are slightly nomadic these days.  Moving many times in life for school or work can make it hard to become part of a village.

TB and I are definitely classified as part of these modern nomads, having lived in several cities and states both before we met and after.  We've both become good at making friends and connections in each place we've lived, have stayed in touch with many of these people and can call many of them life long friends.  Although our Christmas card list has become quite extensive, it's safe to say that the list is not cohesive. It a mix of several different groups with many similarities and many differences.  We don't have one large network of friends and family who all know each other- it's a patchwork, in a sense, of people from all over the country.  A wonderful hodge podge of folks - but hodge podge nonetheless.

I think it's easy to feel like you don't belong to a village when your network is similar to ours.  I remember putting together our wedding invite list several years ago and thinking how interesting it was that we were sending invitations all over the country to several different "groups" of people - many of which had never met anyone from other groups.  It made me wonder if we were really connected to any group of people or if we had spread ourselves too thin.

Then I remember how humbled I was the weekend of our wedding.

So many people from all aspects of our lives took the time out of their busy lives to come celebrate with us. From family we hadn't seen in many years, to new friends, to coworkers, to childhood friends.  I'll never forget walking into the Hermes Bar at Antoines, Brennan's, Pat O's, the St. Louis Cathedral and seeing faces from all corners of our lives.  I realized that this was likely the only time in our lives that all the important people in both our lives would be in one place at one time.  And an amazing thing happened as the weekend wore on, different groups of people were mixing and mingling.  By the end of the weekend, it had gone from a hodge podge group of folks, to one cohesive group - all in New Orleans for one common purpose, to help us celebrate (and perhaps experience the French Quarter....).

I've been humbled once again.  Since baby TB's arrival, we've been overwhelmed by kindness from our friends and family - many of the same people from our wedding and many new people we've met since that time in New Orleans.  From all the meals that have been dropped off, to our neighbor mowing our lawn, to the kind notes and thoughtful gifts.

As we've started this new part of our lives, we've been reminded again and again over the past few weeks that we do indeed have a village.  It might not be the type of village that we traditionally think of, but a wonderful village that suits us perfectly.  Our village. 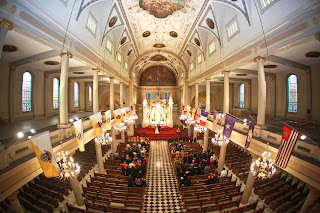 Our village 3 years ago today 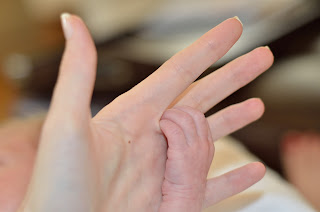