Normally this is the time of year when you resolve to be a better person or accomplish some goals for the coming year.  Before we had a chance to do that, 2011 started to unravel at the seams.  It started with a crash.  A literal crash in the middle of the night.  Only to discover that one of my favorite Christmas presents (a glass terrarium) had broken: 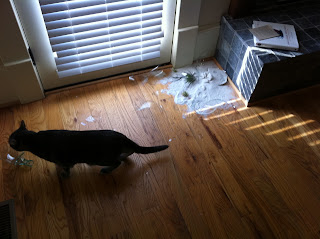 Notice the culprit in the shadows 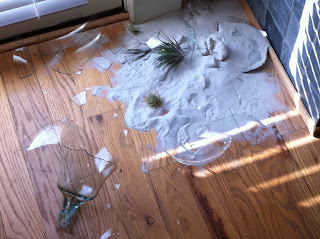 Then, we had a slight incident with cat puke and our new white couches.  Yes, we decided to buy lighter couches - so this one may be our fault.  Puke ended up all over the couches, resulting in our first of many (I'm sure) professional and expensive couch cleanings.

Then, we had our first major home repair.  A broken garage door.  Which meant that TB tried to fix it himself, by performing extensive internet research.  This only resulted in a spring flying all around the garage and nearly took his eye out.  And did not fix the door.  Those home repair skills do not come over night.  Perhaps I should think about buying him a Bob Villa book.  Do they still make those?

Although I'll acknowledge that none of these events are catastrophes, it did all happen in the first few days of the year.  We had a few days off work and were trying to be productive, but kept having to deal with our "incidents" instead.   We stopped where we were and decided to call shenanigans on 2011 and just started the year over, a few days later than January 1st.

Since then, we've replaced the terrarium, almost have the garage fixed and have scotch guarded the couches.  We just needed a little do-over on that one...
Posted by Leslie at 3:23 PM