The Don't Ask, Don't Tell policy within the military has somewhat recently ended.  But have no fear - there's no worry that we have to let this nomenclature just fade away.  I've noticed lately that we can very effectively recycle this term in another arena where it is very much needed anyway.   Let me illustrate:

- Never ask a gal if she is pregnant:  Never.  Ever.  Ever.  It does not matter if this person has suddenly sprouted a basketball under her shirt.  If she hasn't said anything to you - don't ask.  Just play stupid.  It doesn't matter if your 90 lb recently married coworker suddenly looks like she has some meat on her bones.   Or if your several-glasses-of-wine-every-night friend has taken to drinking water because she's on "antibiotics".  Or perhaps your beer drinking friend who hates liquor has taken to consuming mysterious clear "mixed drinks" to "reduce her calorie intake".  Or stopped eating sushi and sandwiches.  Or is "sick" all the time. None of that matters.  Play stupid and don't ask.  You can gossip about your suspicions to other friends and then pat yourself on the back when you finally get confirmation.  But don't ask.  Never.  Ever.  Ask.

- Never ask a gal when/if she plans on having children:  I'll admit it, before having kids, I would do this.  After having kids.  I will never do this again.  It's such a personal question.  It should be added to the old adage of don't discuss politics and religion at the dinner table.   Because, perhaps that person doesn't want to have kids.  Or can't have kids.  Or has been trying to have kids and it's not going well.  It's complicated.

- How someone is doing after having a baby:  Really?  How do you think that person is doing?  Come on.  Having a baby is a very unpleasant experience and no one is doing very well - and anyone that tells you otherwise is a liar.  Very unpleasant things are happening and will be happening for quite some time.  Would you really like to know how I'm doing?  I'll tell you, but somehow I don't think you really want to know.  Don't ask - just come over, hold the baby and if you're so inclined - bring some wine or food.  Because remember, we've been drinking water, eating salads and avoiding many of the good things in life for 9 months.

If you're pregnant:  If you're 8 months pregnant and still not comfortable telling a certain group of folks about the impending bebe - work, friends, family - whoever.  Don't do it.  Lie.  Lie.  Lie.  Even if you are clearly pregnant - just lie.  The person being lied to will know and call you a big fat liar.... but do it anyway.  It's no one's business unless you're ready to make it their business.  I'm amazed at the amount of people who clearly ask if someone they barely know is pregnant.  Unless you're 100% ready to start discussing this situation, lie ladies.  Just lie.

Birth Stories:  Unless we are great friends, I ask for the story or we're having a heart to heart moment where sharing seems appropriate.  DO NOT tell anyone else your birth story.  It's like watching a horror movie.  I hate them.  They give me nightmares for weeks.  I do not voluntarily watch horror movies and I do not want to hear your birth story.  If you tell it anyway, I will nod and smile while loudly singing a song in my head to drown out everything you say.

And in keeping with this new spin on Don't Ask. Don't Tell.  I'll share with you JTB's 6 month photo from February of this year:


Yes.  I realize it's now July and that was taken in February.  But I decided to stick with Don't Tell.   And lied when people asked.  I "gave up drinking for Lent" or "tried to eat better and get back in shape after having JTB".   I even tried to get TB to let me not tell anyone.  Period.  Ever.  And just send out our holiday card this year with a picture of the expanded family.  I think people would have figured it out.  Perhaps been confused for a moment, but eventually figured it out.  But TB seemed to think that was taking it a bit too far.  I suppose he is right on occasion.

So anyway,  I'm ready to tell.  HTB will be arriving in October.  Just don't ask me what my plans are for having another one.

And now JTB today.  With hair in his eyes.  This kid could use a good hairbrush: 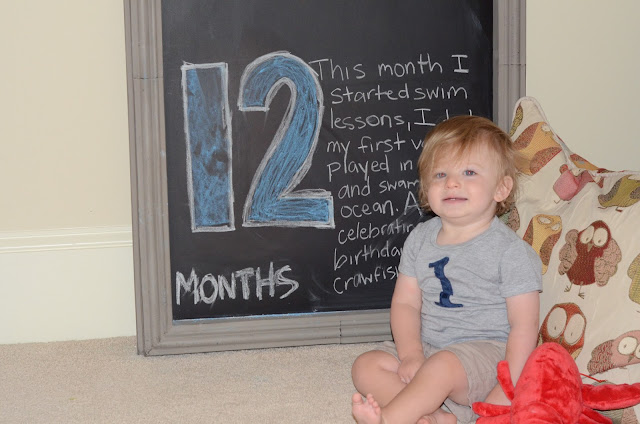