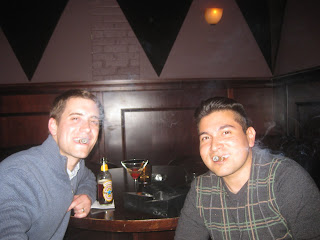 Every guy, even if he's married, needs man friends.  And TB is no exception.  No matter how much he loves me - he will always need man love.  And not just any man friend will do - that special kind of man love that means you can talk about things that girls don't understand, smoke cigars and have jokes that no one other than the two of you understand, no matter how many times you have explained it to others.  This special kind of man love is very evident between TB and his special friend.  For the purposes of this blog we'll call him "Apple Pie".

After returning home from a really long recent work trip, where I didn't see TB for 2 weeks - I received a surprise! TB came home early and had a fabulous dinner planned for me.  We ate at a great restaurant and had some delicious steak and potatoes.  Num num num - he sure knows the way to my heart. But wait, one more surprise.  Apple Pie was in town for a visit!

As boys will be boys - we ended up going to a cigar bar and drinking martinis.  Well, the boys had the cigars and I had the martinis.  (Don't let the pictures fool you - the cigars were all the boys, but I think TB was sneaking sips of my girl drink)  It was a long night of catching up with Apple Pie and me being quite confused trying to figure out the weird man stories from their days in Omaha.  These were pre-Leslie days and I'm sure I'll never know the extent of the trouble these two got into.  I never really understand what they're talking about, but all their stories seem quite hilarious to the two of them. 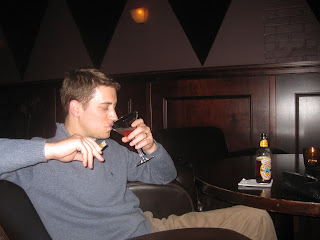 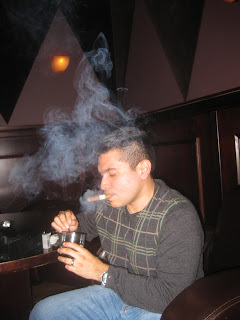 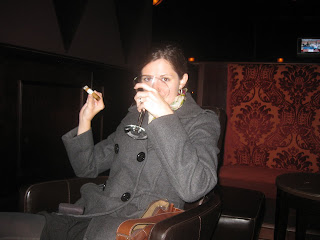 Ahhhh.  It was a great night and great to see Apple Pie...We miss you guys!
Posted by Leslie at 6:13 PM