The Cone of Shame is Serious

I am definitely running the risk of sounding like the crazy cat lady by posting another cat post, but this is a good one.  Promise.
Our two kitties had a "procedure" shortly after moving to Atlanta.  When I picked them up, I had a shocking, horrified moment when I realized they both had on the dreaded cones.  However, the vet prefers to call them "E-Collars".  Whatever.  They're cones.
These two cones were supposed to be left on for a whole week.  It was the saddest sight, seeing them walk around and bump into things with the cones....  So.  I cheated and took them off early.  Even though I removed them, they caused so much emotional damage that one of our cats made a suicide attempt.  For real.
One afternoon, I realized it was just a little too quiet in the apartment.  I walked around calling for Captain.  Calling, calling and calling and no answer.  I thought maybe he was just hiding and went back to work but couldn't shake the feeling that something was wrong.  It suddenly hit me that I had left the second floor porch door open and maybe he had decided to make a run for it.  As I was peering over the porch railing, looking at my car that was parked just below the porch - I noticed kitty prints on my car roof then a big smudge down the windshield (where said kitty had slid down the glass), then more prints on the hood.
I raced downstairs and found Captain hovering and shaking underneath my car.


Needless to say, the porch is now off limits for kitties. 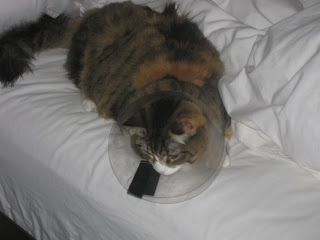 Soooo sad.  I hate the cones. 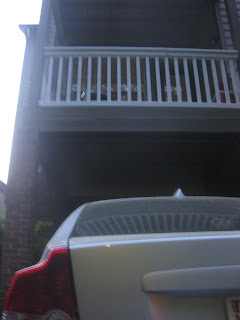 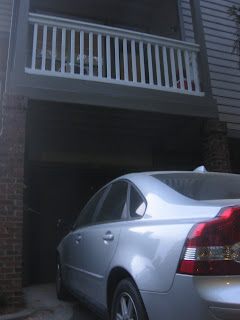 The scene of the crime 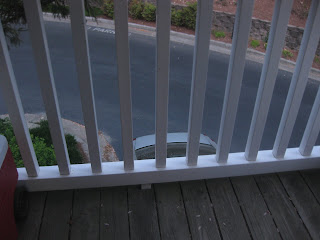 The kitties will never see this porch.  Ever. Again.
Posted by Leslie at 5:53 PM