"We Just Have Different Styles"

In a moment of "do-it-yourselfedness", I decided that we should take on a home improvement project - versus our history or just paying someone else to do it.  Since we've moved in, we've hired someone to hang the blinds, paint the exterior, stain the deck, do the landscaping and clean the house.  I was feeling a little guilty and lazy about all this subcontracting - and decided that we could take on the next project ourselves.

Painting the ceiling and built-in bookshelves in the office. 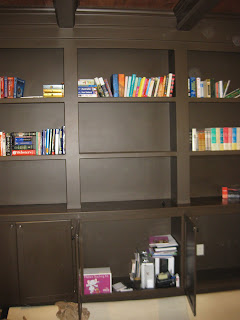 Painting can't be that bad and doesn't require too much skill, right?  My suggestion was greeted with hostility and doubt by TB.  Serious hostility and doubt. After much convincing, he agreed to make an attempt at this project, but was sure to let me know that my credibility was on the line.  Talk about pressure!

I diligently prepared for painting day, by doing research on the best paints and tools to use for the project.  I wanted our office to look good, but to also prove two points:

1.   I can prepare for a project just a well as TB can - proving that I am credible and a good project manager.
2.  We could take on a home improvement project and succeed!

Side Story:  Now is probably a good time to point out a theme in our house, that may explain the comment above about my credibility being on the line.  Sometimes TB gets confused about who I am.  He does often come home in work-mode and thinks that I am one of his employees and not his wife.  He'll occasionally says things like, "Let's have a discussion about our goals for the year." or "Let's table that" or "Send me a meeting invite" or "Why don't you create a deck on that issue" And of course the above mentioned action of often assigning a project manager to each task we take on.

Side story done and on the painting prep:  Now, I'm typically an over-prepared organized person.  BUT, as prepared as I often am for projects, I'm rarely TB prepared.  You see, as Type A as I can be, TB makes me look like a sloppy mess.  He is a super planner.  TB preparedness includes spreadsheets, charts, graphs and research galore!  Checklists and timelines.  From vacation planning to minor purchases.  It's endearing, except when I am painting project manager.  We did assign a project manager to this task after all.  And it was not TB.

And finally, on with the painting. The inevitable happened and we got in a scuffle over whether we should sand  the built-ins with sand paper sheets or sand paper blocks.  I said sheets.  He said blocks.  As we're both furiously Googling the benefits of each and stating our cases, TB stated that this was bound to happen because, "we just have different styles."

Hmmm.  That's an interesting thought.  We do don't we?  I always lumped us both in the same group, but he made a good point.  I've always been the most organized person in my group of friends and definitely in my family, and I would always get frustrated with the lesser organized folks.  Well, in our house - I am now the "lesser organized folks" that makes TB frustrated. Hmmmm.  That's one side of the fence I've never been on.

Once we compromised on our sandpaper delimma, it took us 2 weeks, countless hours and few more stupid fights due to our different styles, but the built-ins were complete. And not only complete, they look pretty darn good, if I do say so myself. And we both learned a good lesson - there are multiple ways to successfully complete a project.  Perhaps a chart or graph wasn't completed, but it was done well.

As for proving my two points:

1.   I can prepare for a project just a well as TB can - proving that I am credible and a good project manager.  Check.  I think you'll see by the pictures below that it was a job well done.

2.  We could take on a home improvement project and succeed!  Half Check.  We both got a little discouraged by the ceiling aspect of the project and had to throw in the towel on that one. Pablo's Painting took over PM duties.  Even without an Excel spreadsheet. 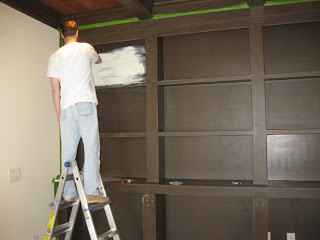 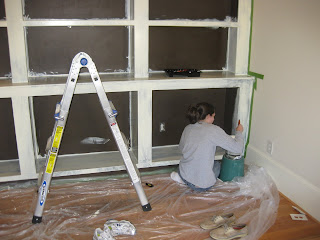 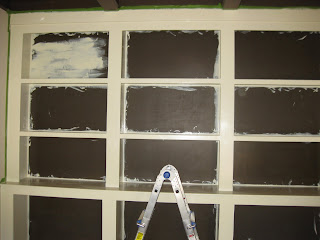