Once a month or so we get a publication in the mail called The Georgia Bulletin.  It's a little newspaper about the goings on of the Catholic church in Atlanta.  Mixed throughout the articles there are usually advertisements about Catholic schools, religious movies, church bookstores - you know, the usual - very targeted advertisements.

We usually thumb through it, perhaps read an article or two and then toss it. The same thing happened this month; however one of those very targeted advertisements caught my eye.  See below: 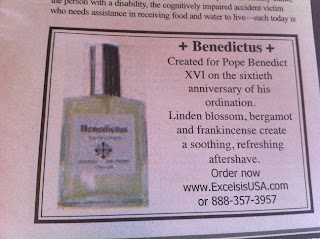 An aftershave that smells like the Pope?  I'm not sure about you, but when I think of aftershave, I think of a rustic manly smell.  I think TB's current Old Spice says something like, "smells like wilderness, open air and freedom".  Corny?  Yes.  But I suppose it makes sense.  And it probably works well from an advertising sense.  But the Pope?  Nada.  I just can't make any sense of that.  This puzzled me so much that I thought maybe if I visited the website I could understand it a bit more.  I did find a further description of the product - but did I make more sense of it?  Nope.

Benedictus - The marriage of linden blossom from Benedict's native Germany with frankincense from the Holy Land and bergamot from Italy creates a subtle and dignified fragrance, befitting a man of finely cultivated tastes. Barely perceptible is a nuance of citrus, and as it evolves, a discrete hint of musk. The overall impression is one of understated elegance.  A slightly astringent and balsamic quality makes it a soothing and refreshing aftershave.

"Befitting a man of finely cultivated tastes?"  With that description, my mind immediately goes to the Pope.  Right?  Doesn't yours?  But hey - at $27 and free shipping to the US, what a steal!

Upon further investigation of the website, I did discover that if Benedictus isn't exactly your speed, there are other options.   Made from the "private formula of Pope Pius IX" no less.  Christmas is coming up after all. 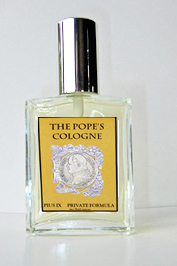